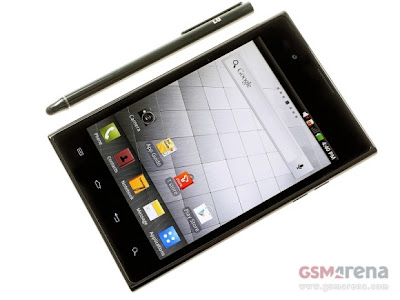 LG Optimus Vu Is Going Global With a Quad Core CPU. LG has announced its global availability of the unorthodox screen ratio sporting Optimus Vu phoneblet. This device is to "say hi" to the selected markets in Europe, Asia, Middle East/Africa, and Latin America in the next September. The most important change this global LG Optimus Vu is that it's gonna bring a new CPU and chipset. The dual-core Qualcomm silicon of the Korean and Japanese market specific devices will be replaced by a much speedier NVIDIA Tegra 3 quad-core CPU.

It will come at the expense of the phoneblet's LTE connectivity and is certain it'll make the 5 inch screen packing handset a solid top shelf proposition, while the rest will remain unchanged. They include a gig of RAM, 32GB non expandable memory, 8MP camera, and Android 4.0 Ice Cream Sandwich Os. The price is no yet confirmed.
at Monday, August 20, 2012