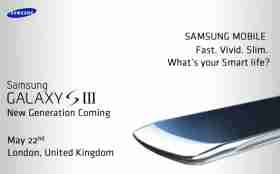 Again, a new appearance of Samsung Galaxy S 3 made convincing. Ain't like before, now the image is more convincing as it rumored appeared on a press release, isn't as usual where we previously found the image on the net unknowingly where, when, or who's taken the image and spreaded it so we found it on the net. Just, i think "Why did the person captured the image capture only a half body instead of the whole part?". To make us curious? or maybe a mystery?. - Clearly the image shows that the phone is cased with a sleek metal and is tapering towards the bottom. According to the news issued, this Galaxy S 3 is to launch on may 22 in london.
at Friday, April 06, 2012